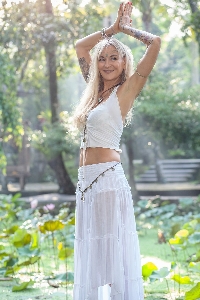 Elizabeth Shakti Kaloczi was born in 1961, the eldest daughter of Hungarian refugee, Ferenc Kaloczi. Aged seven, she was finally allowed the ballet classes she’d dreamed of for many years when her grandmother offered to pay for them.  At eleven, her audition to the Royal Academy was cancelled because she had glandular fever a few weeks before the audition. Never quite ‘fitting in’ Elizabeth dropped out of college until her mother found her a course in Fashion at Leicester Square’s College For The Distributive Trades.  But the thought of working her way from office junior to senior fashion buyer wasn’t appealing.  After gaining her diploma she quit her prestigious job in a central London fashion house and continued with a string of jobs, her longest employment was just six months in a local mental hospital, her shortest job was a half day at ‘Our Price Records’ where Elizabeth simply wanted to see if she could beat the other fifty or so applicants by being offered a job in the very trendy new record store.

From market stalls to selling washing powder made by paraplegics in Sydney, normal ‘working life’ simply didn’t appeal to this young lady.  So, she made a vow, never again to work for anyone else.

Her dream was to have a family, and two days before her 21st birthday and only days after her family had emigrated to Australia, she met her first husband, Steve Taylor.

Elizabeth’s family returned from Australia with the early eighties recession and Liz returned home with new punk husband in tow and her four-week-old baby. Three years later her second son arrived. But then tragedy struck. Her young husband was diagnosed with cancer aged just twenty-five. Her new-born baby was put on a life support machine, and Liz was widowed five months later, on Mayday 1987.

Steve’s funeral was exactly five years to the day that she had met him in Perth on 5th May 1982.

A second marriage, and then a divorce in 1999 and a string of relationships followed.  Liz’s Post-Traumatic Stress Disorder was disrupting her new-found career as an aerobics teacher. Her second marriage had been a deep soulmate connection, but the relationship died as the desire to live the rock n’ roll lifestyle diminished in favour of health and more natural and authentic living.

After her divorce, which was ‘gut- wrenching’ and heart-breaking, the guilt that her boys had ‘lost’ a second father caused her deeper anguish. Life was throwing it in faster than this young mum could cope with.  She found herself dealing with two hormonal teenage boys and all this took its toll on her health.

Life at times became unbearable.  Prayers seemed to help where nothing else could. Liz finally discovered a new way of living. She studied Yoga, Pilates and natural health, she created fit from within, a philosophy for life.  Her beloved mother died aged just sixty-five, and Elizabeth was diagnosed with an incurable disease, Ulcerative Colitis. After six years of drug therapy she decided to come off all medication and to heal naturally. This became her number one focus. With grown up boys now in their late twenties, she decided to train teachers in her Pilate’s studio and travel the world.  Not allowing thoughts of ‘I can’t afford it’ into her mind, she started visualising and creating her dream life.  Some of her long-term clients, many who had been loyal for over 20 years, were upset that she was ‘leaving them’. However, they eventually realised that in order to continue her teaching, Liz needed to travel. After an invitation to teach in Thailand at an exclusive detox resort it was Liz herself who declared ‘How can I teach this stuff unless I live it?!!’

At fifty, she realised that travel was essential to her life’s journey, and she ignored the ‘you can’t afford it’ voices in her head, and did it anyway.

In August 2017, after going through a spiritual awakening, Elizabeth Shakti changed her name to Shakti Kali, finally ready to embody the energy of the goddess, allowing everything that she’d previously known to fall away. Time to live the dream, and to encourage other middle-aged women to do the same, to ‘find their Shakti’ and live with purpose, presence and passion. 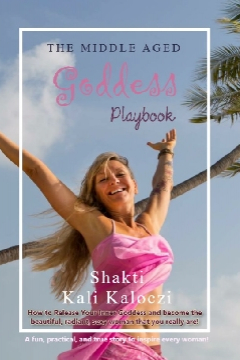