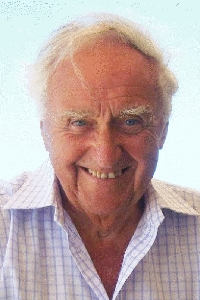 Ron Sandell was born in London soon after electric trams were introduced. He survived the war but his education was sadly neglected, so he was relieved when the RAF sought his help.

On demobilisation, and after trying several other professions, he was taken on by the BBC as a junior programme engineer in 1950. He acted as a gofer in outside broadcasts, which included novel sound effects for The Goon Show (a very suitable introduction to a broadcasting career). He also spent some time in the dungeons of the European services in Bush House, sending programmes to ethereal audiences.

By 1954, having acquired a few appropriate technical certificates in his spare time, he was ejected from live broadcasting and sent to the back rooms of the research department. The details of that period are described at length in his book Seventy Years Before the Masts.

Retiring in 1991, he acted as a consultant for various communication authorities, and also returned to a couple of unsuspecting universities to complete his education. He continues to believe that life could be so much better for everybody if only the world could be run by engineers.

Seventy Years Before The Masts